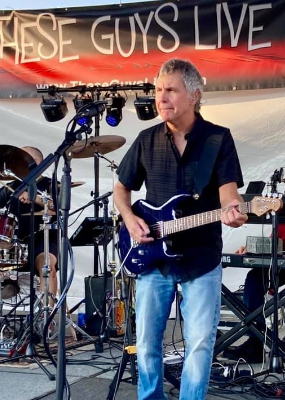 Mike started a love affair with the guitar at a very early age and has continued to play since, with a thirst and desire to play that has never diminished whatsoever. During the 1970's and 80's Mike played in several locally popular cover bands and spent much of 90's working in original music groups.

Mike's wide range of musical tastes includes rock, jazz, fusion, funk and country. He is influenced by such great guitarist as Jeff Beck, Eric Johnson, Steve Howe, Steve Lukather, Larry Carlton, David Gilmour, Jimi Hendrix and Mark Knopfler, to name a small few!  As you can see, his musical tastes cover a wide range and his tremendous talent shows he has mastered them all making him one of the most sought after guitarists in Central Ohio.

When a casual jam session, with other TGL members became the catalyst that landed him with THESE GUYS LIVE, Mike knew he had found the band that would showcase his many talents while at the same time challenge him to an even higher level of excellence. Mike invites you all to come out and share in the magic that is THESE GUYS LIVE.