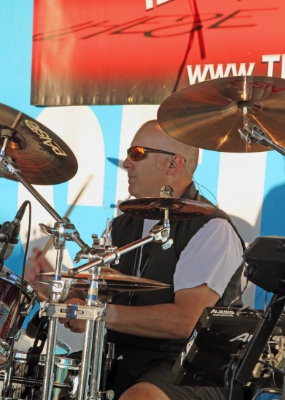 Marty has returned as the drummer of “These Guys Live!” After being in the band from 2014-2018, Marty took some time off from live performing to focus on some other, non-musical interests, including: training for a full Ironman 140.6 triathlon, building a complete scale model railroad of the mid-1970’s era Chessie System, and studying the mating habits of the North American Snowy Tree Cricket.

Marty started playing drums in elementary school, primarily as a means to annoy his parents, sister and neighbors. After graduating high school, and receiving a never to be broken record of 1,245 noise complaints from local law enforcement, Marty went to study at the famed Berklee College of Music in Boston, MA. Marty then moved to the greater New York City area, where he began recording and touring in both the U.S. and Europe with several projects including the melodic rock band Norway (Frontiers Records), singer/songwriter Laura Diamond (3 Wishes Records), alternative rock band Active (Tribeca Artists Records), Danger Danger (Sony Records) lead singer Ted Poley, as well as a variety others. In addition, Marty kept a full schedule of live dates with local NJ cover bands, averaging 150+ dates a year.

Upon relocating to Columbus in 2006, Marty started performing with many local Columbus bands, including Breaking Sane, Level 7, Jaded, Sonic Boom, the VV Smith band, and the Cosmic Extraterrestrial Moon Waffles.

In addition to live performing, Marty also regularly records and provides drum lessons out of his home studio.

Marty is extremely happy to once again be a member of TGL. “This is the band I was looking for since I moved to Ohio. ‘These Guys’ are some of the most talented and well-respected musicians in all of central Ohio. I’m looking forward to playing with this band again for many, many years!”